>>> "Somebody's Darling" may be my favorite of all Civil War Era...

>>> This song has become so poignant to me. Having lost my young...

Somebody’s Darling, was originally a poem written by Marie Ravenel de LaCoste, a nurse (and a poet) of Savannah, Georgia. The poem first appeared in print in 1864. Miss de LaCoste took her poem to Hermann L Schreiner of J. C. Schreiner & Son music firm of Savannah requesting that it be turned into a song. Schreiner forwarded the piece and the request to John Hill Hewitt.

The moving scene: Women around a dying young soldier (no matter if he's a Federal or Confederate). They maybe are just nurses, but is their patient able to understand? Was a mother's hand that touched him so lightly? Was a sister's? Is he still conscious? And how much?
Definitely the saddest of the Civil War songs. The true face of war.. 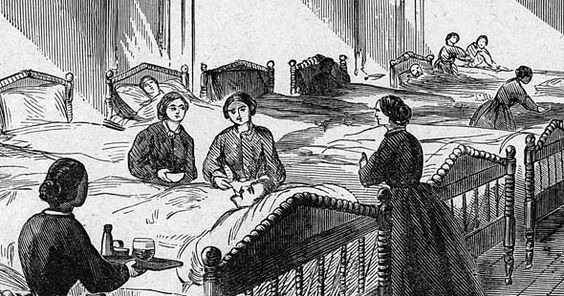 Into the ward of the clean white-washed halls,
Where the dead slept and the dying lay;
Wounded by bayonets, sabres and balls,
Somebody's darling was borne one day.
Somebody's darling so young and so brave,
Wearing still on his sweet yet pale face
Soon to be hid in the dust of the grave,
The lingering light of his boyhood's grace.

Give him a kiss, but for somebody's sake,
Murmur a prayer for him, soft and low,
One little curl from his golden mates take,
Somebody's they were once, you know,
Somebody's warm hand has oft rested there,
Was it a Mother's so soft and white?
Or have the lips of a sister, so fair,
Ever been bathed in their waves of light?


Somebody's watching and waiting for him,
Yearning to hold him again to her breast;
Yet there he lies with his blue eyes so dim,
And purple, child-like lips half apart.
Tenderly bury the fair, unknown dead,
Pausing to drop on this grave a tear;
Carve on the wooden slab over his head,
"Somebody's darling is slumbering here."

"Somebody's Darling" may be my favorite of all Civil War Era songs. I know it's really sentimental, but it makes an important point. Everyone (or, sadly, very nearly everyone) in the Civil War had people at home who were "watching and waiting" for them, hoping desperately their darling would come home again.

This song has become so poignant to me. Having lost my young blonde-haired darling brother many years ago, and now have suddenly lost the most gentle blonde-haired friend (a friendship of 30 years), I have read the words of this song often during this May bank holiday and wept.

The words, and the thoughts, this song bring to mind of mothers waiting for their beloved sons who have died in battle, is heart-breaking. The Civil War was long ago but the sorrows of grieving parents in our lifetime continue.