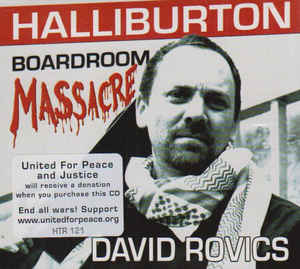 Here are fifteen songs I wrote between January and July,
2005. I recorded them at Sugar Hill in Houston with John Griffin on the board on the afternoon of July 28th. I guess there's another bunch of songs here which are continuing the ecological theme that was heavily represented in Beyond the Mall (and to one degree or another in all of my other recordings). Some of the songs are definitely inspired by the musical sensibilies of TV Smith ("Crashing Down," "Boardroom," "Before the Oil Wells Run Dry," "Waiting For The Fall"). I don't know if any of these songs approach TV's brilliance at writing stuff with great universality to it, nor whether the melodies are as catchy as his, but in any case, his music has been a focus for my own songwriting over the past couple months.


David Rovics.
http://www.davidrovics.com
I joined the army when high school was through
I didn’t know what else to do
Thought I’d take care of that traveling jones
Then maybe take out some student loans

They sent me away to the land of the dead
Where I didn’t know a word that they said
I got shot at a lot, I was nearly toast
But it’s the ones that I killed that hurts the most

I was supposed to stay for a year, they kept me for four
By the time I got back home no one knew me anymore
Of the man I once was there didn’t seem to be a trace
And when I looked me in the mirror I didn’t recognize my face

I can’t tell you how it felt to be betrayed at every turn
Like the earth was spinning backwards, like my heart began to burn
Like I had to do something while I still had the strength to stand
While I still could run with a machine gun in my hand

I thought of Halliburton and the military brass
And the things they get away with all for their ruling class
But I’m not a pawn and I can’t just let it be
And if I’m gonna die, I’m gonna take some of them fuckers with me

I’ll spare you the details, I did what I had to do
There’s a boardroom blown to hell and soon I will be, too
You can say I lost it, you can say that I’m insane
But may no one ever say that my death was in vain

I joined the army when high school was through
I didn’t know what else to do.