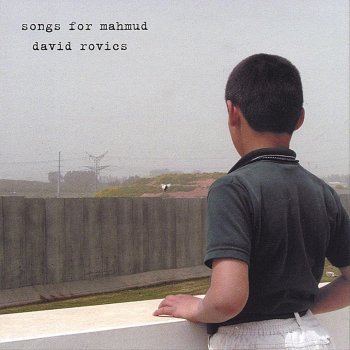 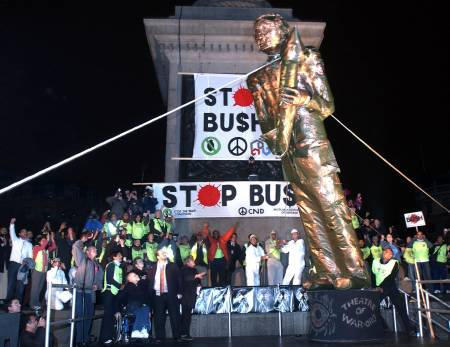 On Thursday 20th November 2003, a quarter of a million protestors brought central London to a halt in one of the biggest workday demonstrations ever. The image of a George Bush statue being toppled in Trafalgar Square was flashed round the world by the film crews and photographers and became a universal symbol of opposition to the US president’s visit. -David Rovics.

* Ken Livingstone, Mayor of London was one of the speakers at the demonstration. He was quoted as saying, "Let everyone recognise what has happened here today, that Britain does not support this war for oil. The British people will not tolerate being used to prop up the most corrupt and racist American administration in over 80 years."
The President came to London
And was greeted by the Queen
And for the people of the city
It was a festive scene
Hundreds of thousands of women and men
Were all in the street
Shouting and dancing and talking
And marching on their feet
But the highest peak of the evening
To be only fair
Was when the statue of George Bush was toppled
In Trafalgar Square

Those days in London
It was the place to be
Young and old, black and white
It was the face of society
Even the mayor came out*
And called him a criminal of war
Said world domination
Ain’t worth fighting for
They said we don’t like Dubya
Or his poodle, Tony Blair
On the day the statue of George Bush was toppled
In Trafalgar Square

The night sky was lit up
And the message it was clear
We do not want fascism
Over there or over here
It was heard first-hand by many
Right there on British soil
We will not fight for Exxon
We won’t kill or die for oil
But for billions around the planet
We were all right there
When the statue of George Bush was toppled
In Trafalgar Square.