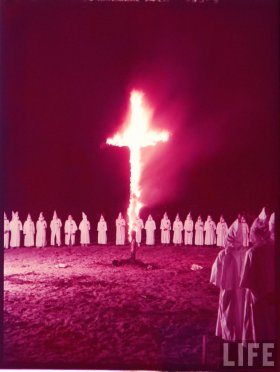 And I say father, father I hear an iron sound
Hoof beats on the frozen ground
And downhill the riders came
Lord, it was a cryin' shame
To see the blood upon their whips
To hear the snarlin' from their lips

And I cried mother, mother I feel a stabbing pain
Blood runs down like summers rain
And each one wore a mask of white
To hide his cruel face from sight
And each one sucked a hungry breath
Out of the empty lungs of death

And I say sister, sister, I need you to take my hand
It's always lonely when it's time to stand
He who rides with the Klan
Is a devil and not a man
For underneath his white disguise
I have looked into his eyes