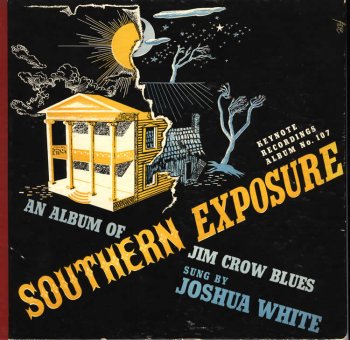 
“President Roosevelt asked White to become the first African American artist to give a White House Command Performance, in 1941. Upon completing that first White House Command Performance, the Roosevelts invited White up to their private chambers, where they spent more than three hours talking about Josh's life story of growing up in Jim Crow South, listening to his songs written about those experiences, and drinking Café Royale (coffee and brandy). At one point during that evening, the President said to Josh, "You know Josh, when I first heard your song `Uncle Sam Says,' I thought you were referring to me as Uncle Sam… Am I right?" White responded, "Yes Mr. President, I wrote that song to you after seeing how my brother was treated in the segregated section of Fort Dix army camp… However that wasn't the first song I wrote to you… In 1933, I wrote and recorded a song called `Low Cotton,' about the plight of Negro cotton pickers down South, and in the lyrics I made an appeal directly to you to help their situation." The President, interested and impressed at the candor of his response, then asked Josh to sing those songs to him again.” (from en.wikipedia)
Airplanes flying 'cross the land and sea,
Everybody flying but a Negro like me.
Uncle Sam says, "Your place is on the ground,
When I fly my airplanes, don’t want no Negro 'round."

The same thing for the Navy, when ships go to sea,
All they got is a mess boy’s job for me.
Uncle Sam says, "Keep on your apron, son,
You know I ain’t gonna let you shoot my big Navy gun."

Got my long government letter, my time to go,
When I got to the Army found the same old Jim Crow.
Uncle Sam says, "Two camps for black and white,"
But when trouble starts, we’ll all be in that same big fight.

If you ask me, I think democracy is fine,
I mean democracy without the color line.
Uncle Sam says, "We’ll live the American way,"
Let’s get together and kill Jim Crow today.