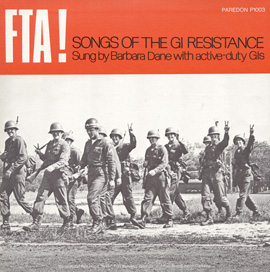 “Probably we should have recorded this song with some electric instruments and lots of echo and things, to make it easier to reach out for it from the electronic fantasy world of today‘s records. But I have a personal crusade going to bring back the sound of the human voice. Unretouched, spliced, or vibed up. It's one small battle I fight on the side, probably growing out of the fact that so many times when it's important to go ahead and sing something that will help to change, teach, heal, or move people there just isn't any mike or stage. So even when you're exhausted from marching and rallying, and speaking and travelling, you just go ahead and do it.
Another small battle is against the notion that there is something less then manly, or womanly, or just plain humanly, in trying to sensitively express your deepest thoughts to another person. The so-called cultural revolution is partly about that too, but millions of Americans are still in the thrall of twenty years of “Bobhope-Artlinkletter-Richardnixonism” and find it very hard to be real. So go write a poem to your best friend or your mother, who may, incidentally, turn out to be one and the same.”
(Nota introduttiva al brano dal libretto che accompagna l’album citato)
Here's to the butterfly in the tropics of Tonkin,
Poised and precise in waves of wind.
Here's to the trembling of his scissors pair of wings,
And here's to the green robe of his queen.
You wouldn't want to snatch a monarch out of flight;
That's not the way to be a king.

Here’s to the Rooster, the statue of pride, (1)
His crown of blood, his shining spurs.
And here's to the gallantry and sureness of his walk,
And here's to the service he gives man and woman.
You wouldn't want to hit a bird that doesn't fly;
You’d rather help him feed the hens.

Here's to the color green, the forest and the grass,
And here's to the love within the sea.
Algae and grapes, the windows of the moon,
Cabbage and copper, life's tangled plumage.
You wouldn't kerosene the green from off the earth,
Leaving only lava on the stone.

Here's to the air: we met once on the road. (2)
He lent us his transparency.
We danced and we laughed, our laughter shook the leaves.
We lifted the sails on the masts.
You wouldn't want to make the air your deadly foe;
You wouldn't insult him with gas.

(2) This personified "air" is a reference to a poem by the great Chilean poet, Pablo Neruda.

(3) The star seemed to me an abstract symbol until one night I was singing for soldiers and there it was, on the shoulder of an Air Force man.