I was eighteen and change when the telephone rang,
Calling me to report to the sea.
The Viet Nam War raged on every front page in the country.
I sailed to the war of a faraway shore
With boys no wiser than I...

Too young to vote, and hoping too young to die.
Serving time for the crime of being born American male,
Where sons become Brothers in Arms or brothers in jail.
Perhaps it was love, or self prescribed drugs,
Or the limbo of lost out at sea.

Sailing that line beyond reason and rhyme…
Frank, Dennis, and me.
I recall the resorts and all the opium ports,
But the truth shines later in life…

The plight of the pawn pales greatly in the light of the king.
How convenient is a God, who would spare not the rod,
And send his only child to die;
In the hands of a power intent on only saving a lie?
I turned twenty-one years old
Coming home from the South China Sea,
Slapping paint on the rust
Of the sinking American Dream.

And did the home fires burn upon the heroes return?
Was the red carpet rolled to the sea?
Where was the parade when democracy was saved
By Frank, Dennis, and me?

Now I see in my son, were he to march to the gun,
How his soul would wither and die.
I know how that goes, far too long it’s been happening to mine.
May the damage done me by the powers that be
Never be done unto mine,
And may the criminals and foes be exposed by history and time.
For Dennis and I swore that the Viet Nam War will have ended
At the moment when honor prevails and with justice demanded.
While the names in the Wall on the Washington Mall
Await the dead to return from the sea…
Those veterans still dying, a day at a time,
With Frank, Dennis, and me. 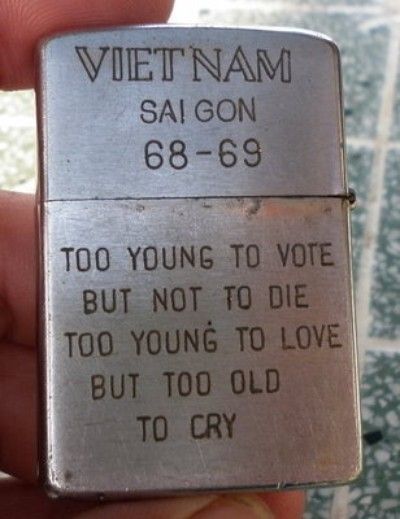 Too young to vote...