Shout Down the Wind


Jim Hinde - Shout Down the Wind

from "Shout Down the Wind
Songs of Peace, Protest, and Patriotism" (2004) 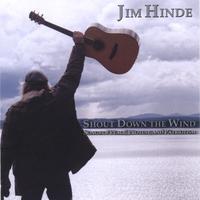 I was born and raised American,
So proud to use that name.
The flag of truth and justice,
Defenders of the same.
My eyes were opened in Viet Nam,
Pride was turned to shame.
My flag has flown at half-mast ever since.
Shout down the wind
Of the storm clouds rolling in.
You know there must be something done,
But you don’t know where to begin.
Don’t give up and don’t give in.
If you’ll stand the street again,
I’ll stand by your side
And we’ll shout down the wind.
The cartoon vision of Uncle Sam
In a snow-white cowboy hat,
Riding freedom and democracy
On a worldwide righteous path.
If not for the dead and dying,
It would surely make me laugh.
We’re serving apple pie
From the barrel of a gun.
I think it’s time we took our country back.
I think you feel the same.
We’ve become a nation of warlords,
Bullies by another name.
If we stand for truth and justice,
Then let that justice reign
With the standing truth "justice starts within."