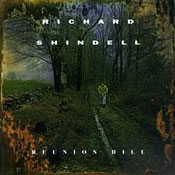 "[...]That economy reveals Shindell as an artist of uncommon intuitive gifts, whose verbal brush strokes strategically conjure up more with less. In Reunion Hill, his masterful lament for Joan Baez, Shindell recalls the pain of personal loss in war not by chewing the scenery or overpainting it, but by evoking associations with unremarkable objects and actions. His Civil War widow, ten years later, remembers that ragged army that limped across these fields of mine—not through a macabre body count, but through the everyday objects that the soldiers left behind:

Even now I find their things
Glasses, Coins, and Golden Rings

And she reflects on the loss of her husband not through the particulars of her suffering or the deprivations of war, but through her evanescent last glimpse of the man as he walks across the valley and disappears into the trees.

Shindell’s songs impart visual impressions and additional storyline evidence in support of moral subtexts that lie just below the surface. He never polemicizes though, instead allowing his listeners to draw their own inferences (even though those conclusions are pretty much set-ups). That engages them in more active involvement with the song, adding greater moral force and emotional resonance to Shindell’s message and the listening experience.

(from Richard Shindell - Art Song Courier)
Must’ve been in late September
When last I climbed Reunion Hill
I fell asleep on Indian Boulder
And dreamed a dream I will not tell
I came home as the sun went down
One eye trained upon the ground
Even now I find their things
Glasses, coins, and golden rings

It’s ten years since that ragged army
Limped across these fields of mine
I gave them bread, I gave them brandy
But most of all I gave them time
My well is deep, the water pure
The streams are fed by mountain lakes
I cleaned the brow of many a soldier
Dousing for my husband’s face