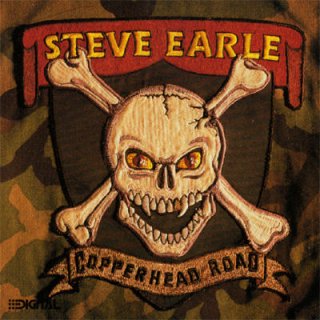 "John Lee Pettimore is, of course, a fictitious character: he is the son and grandson of moonshiners who goes off to Vietnam and, upon his return, becomes a marijuana cultivator and salesman..."
Well, my name's John Lee Pettimore
Same as my daddy and his daddy before
You hardly ever saw Grandaddy down here
He only came to town about twice a year
He'd buy a hundred pounds of yeast and some copper line
Everybody knew that he made moonshine
Now the revenue man wanted Grandaddy bad
He headed up the holler with everything he had
It's before my time but I've been told
He never came back from Copperhead Road..
Now Daddy ran the whiskey in a big block Dodge
Bought it at an auction at the Mason's Lodge
Johnson County Sheriff painted on the side
Just shot a coat of primer then he looked inside
Well him and my uncle tore that engine down
I still remember that rumblin' sound
Well the sheriff came around in the middle of the night
Heard mama cryin', knew something wasn't right
He was headed down to Knoxville with the weekly load
You could smell the whiskey burnin' down Copperhead Road.