Conflicts in Ireland
[1988]
Lyrics & Music by Terry Woods and Shane MacGowan
Album: If I Should Fall from Grace with God 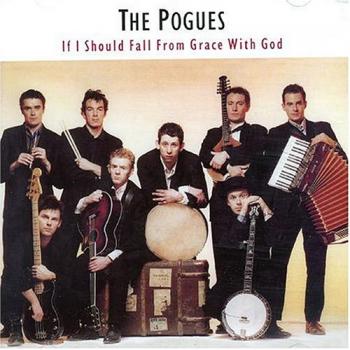 
Divided into two parts, the first ("Streets of Sorrow") written and sung by Woods, describing the pain and sadness on the streets of Northern Ireland at the height of the Troubles , the song is told from the point of view of someone who is leaving the place due to the increasing violence and conflict and who vows never to return "to see more sorrow, nor to see more young men slain".

The second part of the song ("Birmingham Six") written and sung by MacGowan, is a demonstration of support to the Birmingham Six and Guildford Four and the view that they were the victims of a miscarriage of justice and that their confessions had been extracted by torture at the hands of the West Midlands Serious Crime Squad, claiming "there were six men in Birmingham, in Guildford there's four, who were picked up and tortured and framed by the law, and the filth got promotion, but they're still doing time, for being Irish in the wrong place and at the wrong time". Though this was later proven to be the case, at the time the men involved were still convicted and imprisoned for carrying out the Birmingham pub bombings and the Guildford pub bombing during the 1970s.

"Streets of Sorrow/Birmingham Six" proved to be hugely controversial. The group performed the song on the Ben Elton Channel 4 show Friday Night Live on April 15, 1988, but the show infamously cut to advertising before the song was finished. The song was subsequently banned from being broadcast by the Independent Broadcasting Authority under laws which were also responsible for a ban on the broadcasting of direct interviews with members of Sinn Féin and other groups. The IBA claimed the song alleged that "convicted terrorists are not guilty, the Irish people were put at a disadvantage in the courts of the United Kingdom and that it may have invited support for a terrorist organisation such as the IRA".

In 1991 the Birmingham Six were released after having their convictions overturned in the Court of Appeal and the allegations of torture at the hands of authorities were vindicated. The song's ban was subsequently lifted, yet when it featured on a Channel 4 documentary in the early 1990s the channel was still not allowed to play the song, only to show the words on screen.
Oh farewell you streets of sorrow
And farewell you streets of pain
I'll not return to feel more sorrow
Nor to see more young men slain
Through the last six years I've lived through terror
And in the darkened streets the pain
Oh how I long to find some solace
In my mind I curse the strain.