No a vuestra guerra 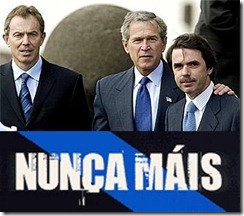 After September 11, the US president George W. Bush decided to take a rodeo around the world for, officially, bring back security to his citizens, but, unofficially, for other dark and no good intentions. So, at the beginnings of 2003, he gave an ultimatum to that dictator, whose elimination sure shall bring back peace to the world: Saddam Hussein. Telling Irak had massive destruction weapons, he begun to seek supports among the international allies chairmen: among them, Tony Blair, UK prime minister, and José María Aznar, chairman of Spain. The preparatives went on, although inspectors of UN declarated they hadn’t found any proof of the existence of those weapons. At January 29, seven Europeans leaders signed a letter of support to US, among them, president Aznar. At Mars 15, in Azores (Portugal), Bush, Blair and Aznar, took a summit in which they signed their alliance, and the Mars 18, Mr. Aznar, in a tense debate at the Spanish parlament, with the only absolute majority of his party, authorized the send of 900 Spanish soldiers in support of NATO armies, although declares they will not take part in the combats, but to do humanitarians actions; the rest of parties, of many conditions, objected, but in vain. At Mars 19, begun the invassion. Today, president Aznar still upholds there were that kind of guns in Irak, but he cannot tell where the hell…

All along the world, people of several conditions, shown their rejection to war. In Spain, it was very important the movement of the artists and intellectuals: actors and actressess, musicians, writers, poets… The old Spanish songwriters got out to the marchs: Paco Ibáñez, Luis Pastor, Labordeta (who, also parliamentarian, show his rejection in tenses debates too, taking all of our admirations: that’ll be other day), Lluís Llach and Adolfo Celdrán, among others. Some of them sung old songs, but new songs too, as this of Adolfo, that sadly became a little prophetic. They are our pride
NO TO YOUR WAR

The sky is black and red
is ocher, like the soil
Between the sky and the earth
only deads fit

NO to your war

The rulers tell us
it’s right what they have done:
the dartboard on our front
the medal on their breasts.

NO to your war

A legless girl
cries and cries, and we know
that there, without medicines
she’s crying her own burial

NO tou your war