When The Cotton Mill Women Rose

The War of Labour: Emigration, Immigration, Exploitation, Slavery
[2008]
Album: The Point of Pittsburgh 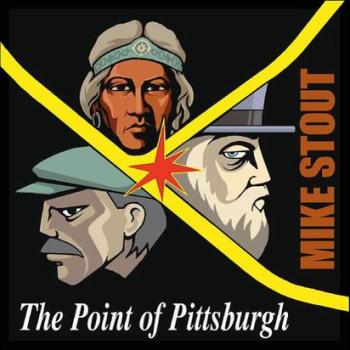 The story of the Cotton Mill Women of Pittsburgh who fought to end child labor and the 10 hour work day. 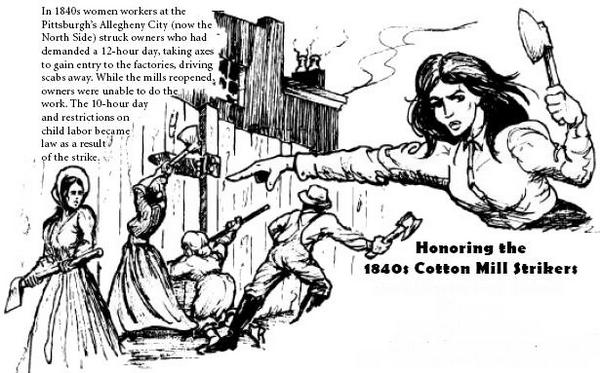 In the 1840’s cotton mills were the primary employers of Pittsburgh’s young women and children. Allegheny City, now the North side, was the location of seven cotton mills employing thousands of women and children. They toiled 12 hours a day 6 days a week repetitiously feeding the relentless and unforgiving spinning and weaving machines. Getting home from work at 10 at night their long days were endless toil for little pay. Women cotton mill workers were paid a mere $2.50 per week for 72 hours of work, while male laborers in other trades earned $1.00 per day. In response to pay cuts in 1843 the female cotton workers marched through the streets of Pittsburgh parading with a banner proclaiming “Two dollars a day and a plate of roast beef”. Their outspoken demand for a 10 hour work day shocked Pittsburgh’s believers in female decorum.

In 1845 the cotton mill workers shocked the industrial work when 5,000 workers walked out in strike demanding a 10 hour day and an end to child labor. The workers forcefully entered several plants to eject scab workers. Accompanied by a legion of men and boy supporters at the Battle of Blackstock’s Factory the women strikers broke down the plant gate and drove off the replacement workers.

The strike of 1845 led to the passage of a Pennsylvania law in 1847 that limited work in textile mills to 10 hours a day and 60 hours a week. Hiring of children under the age of 12 in the cotton, wool, silk, and or flax factories was outlawed. However, the law contained a loophole that allowed workers or a minor’s parent or guardian to sign a personal contract with an employer waiving the worker’s rights to 10 hours days and the hiring of minors.

Pittsburgh’s cotton mill owners insisted that they could not complete with the mills of New England where workers still toiled 12-14 hours a day. In July of 1847 the mill owners locked the workers out of the plants and demanded that they sign personal contracts as a condition of employment. Refusing to be coerced into signing the contracts, the workers stayed out for an entire month without pay. When the owners attempted to open one of the plants with scab workers, a riot erupted. A crowd of 1,500 surrounded the Penn plant. Trying to drive the strikers away the mill manager ordered an engineer to turn a steam value on the crowd and several strikers were burned. With their fury aroused the strikers stormed the fence, broke down the doors with axes and took over the mill driving out the scabs. At the end of August the strikers returned to work when one of the mills agreed to a ten hour day with a sixteen per cent reduction in wages.
A blow was struck for workers everywhere when the Cotton Mill Women rose. These courageous nameless unknown forgotten women affected the passage of important laws that restrict child labor and length of the work day. We take for granted their heroic effects that efforts touch all of us today in our work life.
The Pennsylvania Labor History Society dedicated a historical marker on September 29, 2007 at Allegheny Landing on Pittsburgh’s North Shore to honor their legacy.
In the cotton mills of Pittsburgh, PA,
Back at the dawn of the industrial age,
Young women and girls all workin' like slaves,
For forty cents a day in a factory cage..

On the banks of the Allegheny, for half the pay of men,
Never getting home at night before nine or ten,
It was boomtown times for the capitalist class,
Buttermilk and sauerkraut for the poor working lass.

So in 1843 they marched in the street
For two dollars a day and a plate of roast beef.
In fancy dresses disturbing the peace,
It was justice for all and for each
WHEN THE COTTON MILL WOMEN ROSE.

For twelve hours a day, six days a week,
Sweat and toil in the steam and dirty heat,
Tied to a mean, unforgiving machine,
Spinners and weavers in a land of broken dreams.

The machines set the pace, technology ruled;
Inside the workplace they were driven like a mule.
Constant repetition for the delicate hands;
Brutal exploitation, it was time to take a stand.

So in 1845 they went out on strike,
5,000 strong with their men at their side.
Hauling out the scabs at the battle of Blackstock,
For the ten-hour day the ‘Burgh rocked –
WHEN THE COTTON MILL WOMEN ROSE.

Then they got a law passed for the ten-hour day,
But it had a loophole, and they kept cuttin' their pay.
Then the bosses locked them out, said they couldn't come back,
Till they signed away their rights with a personal contract.

At the Market Street House, a town meeting was held;
Speaker after speaker said it's time to rebel.
This young Kentucky girl they called ‘The Unknown,’
Led the women the newspapers called ‘The Amazons.’

So in 1848 with axes in their hands,
They stormed the mills gates, took a militant stand.
Drivin' out the scabs, fightin' for their fair share,
A blow was struck for workers everywhere –
WHEN THE COTTON MILL WOMEN ROSE.