>>> There are no doubts that Killing an Arab was inspired by the...

>>> Not sure I agree with the interpretation of this song as being... 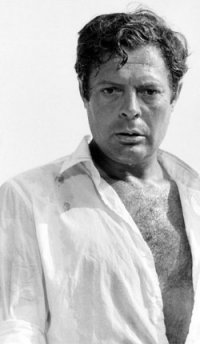 Marcello Mastroianni nel film di Luchino Visconti "Lo Straniero", tratto dal romanzo di Albert Camus
"Killing an Arab" was the first single by The Cure. It was recorded at the same time as their first LP in the UK, "Three Imaginary Boys" (1979) but not included on the album. However it was included on the band's first US album, "Boys Don't Cry" (1980).

Composer Robert Smith has said that the song "was a short poetic attempt at condensing my impression of the key moments in L'Étranger (The Stranger) by Albert Camus" (Cure News number 11, October 1991). The lyrics describe a shooting on a beach, in which the Arab of the title is killed by the song's narrator; in Camus' story the main character, Meursault, shoots an Arab standing on a beach after staring out at the sea and being overwhelmingly blinded by the sun, reflected on the sea, the sand and the knife the Arab was holding.

The song has a controversial history, since it has often been viewed as promoting violence against Arabs. In the US, The Cure's first compilation of singles, Standing on a Beach (1986), was packaged with a sticker advising against racist usage of the song. It saw controversy again during the Persian Gulf War and following September 11th. "Killing an Arab" was the only single from the "Three Imaginary Boys" era not to be included on that album's 2004 remaster although it remains available on the album "Boys Don't Cry".

The song was revived in 2005, when the band performed the song at several European festivals. The lyrics, however, were changed from "Killing an Arab" to "Kissing an Arab". Smith added a whole new opening verse when the band performed it at the Royal Albert Hall, London on April 1, 2006 as "Killing Another". The "killing another" lyric has also been used during the 2007-2008 4 Tour.
This song lends two of its lines to the titles of one of The Cure's compilation albums, "Standing on a Beach", and to its CD/video counterpart "Staring at the Sea".

"Killing an Arab" has been covered by Frodus on the 1995 Radiopaque compilation Give Me The Cure and again in 2004 by DJ Riton. Also, the Electric Hellfire Club copied it on their 2000 Cleopatra Records compilation "Empathy for the Devil". Recently, Santigold covered the song at Lollapalooza 2009.
Standing on the beach
With a gun in my hand
Staring at the sea
Staring at the sand
Staring down the barrel
At the Arab on the ground
I can see his open mouth
But I hear no sound

There are no doubts that Killing an Arab was inspired by the book 'The Stranger' by Camus. However, the song needs to be considered on its own merits. When separated from the book, the lyrics take on very anti-war themes.

Not sure I agree with the interpretation of this song as being anti-war. I've always seen it as a song about the moment at the beach written in L'étranger. The 'beach scene' was not, in my view, making any statement about war, but rather how absolutely estranged the main character was from seeing any measure of meaning to life.