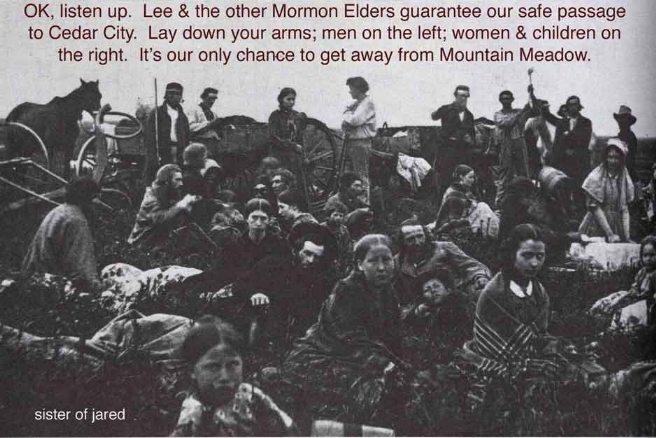 Till came the captain of the band, he surely did deceive
Saying, "If you will give up your arms we'll surely let you live."
When once they had give up their arms, thinking their lives to save
The words were broken among the rest which sent them to their graves.

When once they had give up their arms they started for Cedar City
They rushed on them in Indian style, oh what a human pity!
They melted down with one accord like wax before the flame,
Both men and women, old and young, oh Utah!, where's thy shame?

Both men and women, old and young, a-rolling in their gore
And such an awful sight and scene was ne'er beheld before
Their property was divided among this bloody crew
And Uncle Sam is bound to see this bloody matter through.

The soldiers will be stationed throughout this Utah land
All for to find those murderers out and bring them to his hands.
By order from their president, this bloody deed was done
He was the leader of the Mormon Church, his name was Brigham Young.

compare to original
compare to other versions
Language: English
Versione inglese come cantata da Tom Aley, Ozark, Missouri, 1969.
Come all you sons of liberty
An' to my rhyme give ear
T'is of a bloody massacre
You presently shall hear
In th splendor of a mountain sight
Forty wagons came
And they were attack-ed by an evil band
O, Utah where's they shame

In Indian colors, all dressed in shame
This bloody band was seen
All for t' attack that wagon train
On Mountain Meadows green
They a'ttacked them in broad daylight
As they were on their way
They soon around their wagons all
An' fought in brave arae

Then Lee, th leader of th band
To them his word did give
That if they would give up their arms
He'd surely let them live
An' when they had give up their arms
They'd gain their lives to save
Th word was passed among th ranks
That sent them to their graves

And when they had give up their arms
They started for Cedar City
They decended on them in Indian style
O, what a human pity
They melted down with one accord
Like wax before th flame
Both men an' women, young an' old
O, Utah where's they shame

Both men an' women, young an' old
A lie'n in their gore
And such an awful sight an' sound
T'was n'er beheld before
Their property was divided
Among th bloody crew
And Uncle Sam is bound t' see
This bloody matter through


compare to original
compare to other versions
Language: English
Versione come cantata da Joan O'Bryant, Wichita, Kansas, 1959.
Come, all ya sons of freedom
And to my song give ear
About a bloody massacre
You very soon, shall hear
Across th Zion Mountains
Some twenty wagons came
Surrounded by an angel band
And Utah bears th blame

Then Lee, the angels leader
To them his words did give
If they'd surrender all their guns
He'd surely let them live
Their guns, they gave to angel Lee
T'ward Cedar they did go
They were attacked in Injun style
And gentile blood did flow

They melted down with one accord
Like wax before a flame
Men and women, young and old
And Utah bears th blame
At th order of old Brigham Young
This deed was done, you see
And th leader of that wicked band
Was, Captain John D. Lee