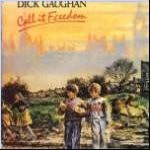 "Written in 1985. 'Amandla' means 'Power'. Many well-meaning people become confused when the oppressed fight back but I cannot think of a single instance in history when a corrupt and brutal regime ever gave up power voluntarily.
When I wrote this song, I dedicated it to the men and women of Umkhonto We Sizwe, ('Spear of the Nation', mentioned in the song) the armed wing of the African National Congress.
Now that apartheid is gone and South Africa has democracy, I re-dedicate it to the memory of Joe Slovo." (Dick Gaughan)
There was a time, beautiful Africa
Children ran free, learning your strangeness
Where to find food, where to find shelter
Part of your being, children of Africa
Out from the sea, onto your beaches
Came the pale stranger, wide-eyed with wonder
Helpless, within your wildness they floundered
Until we fed them and showed them your mystery

Clutching their cross like the spear of a warrior
Into our country, bible in hand
But while we were praying, strange things were happening
We got the bible, and they got the land

Preaching of love in the harsh voice of hatred
Preaching of peace behind cannon and rifle
Praising their god with the point of a bayonet
Shackles and crucifix, slave ship and bible
They gave us Christ, we gave them shelter
We sang of living and they sang of death
We gave them food, they gave us the crucifix
Gave us their God and took everything else

The ghosts of the past walk daily in Africa
Bearing the memory of murder and slavery
Millions were taken and bound down in fetters
And sold off like beasts to make wealthy men wealthier
How many prayers have we cried out in suffering?
How many rivers of blood have we sacrificed?
How many years have we prayed for deliverance?
The white God's answer we heard at Soweto

The white god of Mammon won't listen to Africa
Sends no Messiahs to set the world right
If there's a god, he's not in Johannesburg
Prayers haven't worked - what's left but to fight?