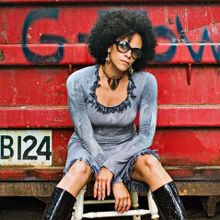 Mommy almost bled to death when she have him...finally
She'd already lost...three
Uterus-bruised, shredded, and weak
From being daily beat
And Friday nights were the worse and...
Daddy never came with flowers
Instead he spent hours at some corner spot
With some bar pop named Cookie
Putting his thing down
Soiling Mommy's sheets with...
Sweet...talk shit,
Cookie's cheap lipstick,
Hair grease, sperm, and jezebel juice

To hell with the good news that...
He was a father for the first time
His thirst for wine and women
Clouded his vision...
No warm welcome for mother and son
Just...
The rank smell of ass-crack, funk, and cum
But Mommy's prayerful strength-her best defense
She...burned the dirty linens
Made a fresh bed
Laid sleeping First Son down
And never made a sound
As she purged her scourge
With birth-blood and quiet tears
Watching as her fears and love and sacrifice
Lie there in his soft skin and new life
Breathing, dreaming, fresh from God's eye
Mommy's little survivor
Like...her

Mommy called crazy and scorned
'Cuz she two more born
One boy soon after
The girl much later and...
Although they were both sung the same lullabies of hate
Her...First Son, the first one
Whose...womb-world was profaned
Came of age playing street games
With Stewie, Rezzie, and Little Brother
'Till his heart start to wither
In pain and shame
Blamed Mom for the wrong she let Daddy do to her
And him...
Let...sins of the Father cause his Innocence to wander
Found out amongst thieves
Chose to squander his dreams
Stopped believing in himself
Become prodigal with his life
Make impossible shit right with...
Gang-ties, crime, lies
Erase wise, woeful words of Mother
Replaced them with absurdities of others
Who had also lost their way

Played a different kind of street game now
First Son plunged deep
Speak street-family vows
Espouse no causes but his own
See, he couldn't protect Mommy's neck from Daddy's grasp
Or...protect Mommy's ass from Daddy's wrath
Couldn't shield her ears from...
Daddy's foul-mouthed, liquor-breath jeers
His only defense-served be confidence
Brown bottles housed his swift descent
Phones called cops on block frequent for his shenanigans
Now...Daddy and him twins in addiction
Driven to false-hearted heavens and friends
By liquefied demons
Had become what he despised from Conception 'til End
Destined for a demise
Survived nine lives of staying high
Conning, jewelry-pawning, arrests, theft
Womanizing...only for money, never for sex
Bullet in chest, baseball bat to the head
Left for dead
So, eyes wide and glassy
Speech...slowed and slurred
Lips twitched with caked-up codeine candy
And mouth corners one December 24th
Mr. Hide and False Friend
Took final ride to suburban supplier
Shots were fired by the gray man
With shaky hand
But not shaky enough to miss...
Hit...Lost Boy in back
So-called Friend runs for door
Leaves First Son blood-born
Lying alone in blood on cold floor

Death was the cause of...
Returning to Innocence Lost...

Baby 'Sis awake for dawn on Christmas morn
To Mommy's sobs and shakes
Daddy's silhouettes of regret
All past, omitted, and absolved by lost
As they clung to each other
Knowing...