War in Viet Nam as seen from the U.S.
[1971]
Dall'album "She Used to Wanna Be a Ballerina"
Parole e musica di Buffy Sainte-Marie 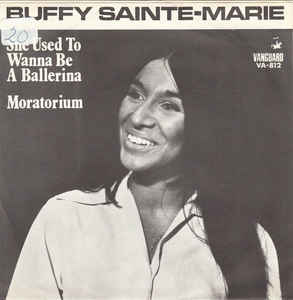 Una canzone dalla parte dei soldati mandati a morire in Vietnam.
Il contenuto è analogo a quello di altre canzoni dell’epoca, come Bring Our Brothers Home di The Covered Wagon Musicians, Bring The Boys Home di Freda Payne e Bring Them Home (If You Love Your Uncle Sam) di Pete Seeger…
Captain Collier came home
he'd been fighting the war
and i guessed he thought he'd return
as a hero and more
And he walked down the street
Of the old home town
and he saw how it is around here now
Now Captain Collier had to call
far too many girls for a date that night
All the girls had gone out
with all their long-haired boys...
Captain Collier, he cried,
"What the hell have I been fighting for?"

Oh, Soldier, it's for you
We wanna bring you home
We wanna hold you in our arms
Come back and keep us warm.

PFC Mannie Stein
had been drafted and gone
he'd been told that only cowards
would say no
He came home and called some old friends
They’d resisted the draft
And they both were in prison
And their wives and their kids
were all skinny and havin' a bad time
And PFC Stein
He remembered the men
Called political prisoners
You know where and when
And he learned that the lines are tapped all the time now
And he's wondering if maybe his bravery is needed at home now.

Yes, Soldier, we're afraid
We're not just being fools
We're gassed and beaten here at home
We've got to change the rules.

Corp’ral Thomas McCann
Is a three-year marine
Someone told him he’d better join up
It would make him a man
He came home and to the park he went
And he sat down on a bench
And a dungaree girl told him he'd been a man all along
And he looked at the sign that she carried in her hand
It said “Fuck the war and bring our brothers home."
And Corp’ral McCann he looks into her eyes...
And I believe that he's begun to understand.
Yes, Soldier, it's for you
We formed our little bands
The politicians and the magazines
They just don’t understand.

Yes, Soldier, it's for you
We’re rskin’ all we have
We’re nailed and jailed the same as you
Our lives are up for grabs.

Yes, Soldier, it's for you
We want to bring you home
We wanna hold you in our arms
Come back and keep us warm.

Hey, Soldier, it's for you
We wanna bring you home
We need you to support us here
Come back and lend an arm.